On February 18, 2013, P!nk’s “The Truth About Love Tour” made a stop in the Bay Area and I was lucky enough to have tickets with my friend Hazel.

The show was sold out that night at the HP Pavilion in San Jose, CA. It was the opening week of her tour and I had heard nothing but good things about the show. The opening band was the Swedish band, The Hives. Sadly, I was only familiar with their hit “Hate to Say I Told You So” from 2000. I did enjoy their performance, they had a ton of energy and were entertaining.

I’ve loved her music since she first broke on the scene. I have a few of her albums and although I wouldn’t consider myself a die-hard P!nk fan, I just haven’t gone to any of her concerts before. I was very excited to see her live!

Of course, she opened up the show with a bang, playing “Raise Your Glass” complete with aerial awesome-ness! In case you were living under a rock, you’ve probably seen P!nk perform on an awards show doing all kinds of cool aerial work, flying through the air and being suspended from the ceiling and STILL singing live. And if you’ve been lucky enough to see her perform live, then you will probably agree with me that seeing her live does NOT do those awards show performances justice. 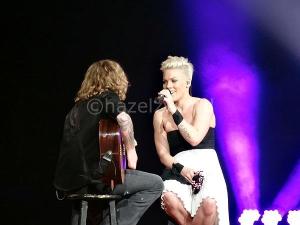 P!nk- No safety, just mats on the stage floor.*

*PHOTO CREDIT: Two above photos from Hazel of DGTG

WOW. Just WOW is all I can say about her entire show. “The Truth About Love” was visually stunning. There were moments when P!nk was showing how raw and strong she was physically and was still singing with ease and my jaw was literally on the floor in amazement. Her band was awesome and so were her backup dancers. There was a “ringmaster” during the show and he was pretty entertaining. But, P!nk….she was INCREDIBLE! I don’t want to spoil it for some of you since her US tour is still going on and then she’ll be bringing the tour to Europe. AND just announced the other day is that she will be extending her tour and making another round of stops this Fall 2013. And yes, I plan on seeing her again when she returns to the Bay in October. 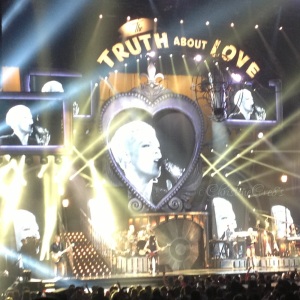 The Truth About Love Tour

To catch some snippet videos that I took during the show, check out my YouTube channel.